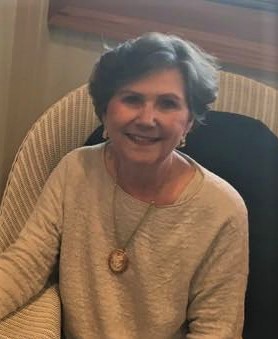 Tonia Marie Sharp was born on September 23, 1938, on a farm in Beaverton, Alabama, to parents, James Madison Sharp and Ann Lockhart Sharp. Tonia met her heavenly Father in the early morning hours of October 26, 2022.

As a young child, Tonia helped her mother and sister, Halma, on the farm while her father was serving overseas in the Navy during WWII.  She lived in various locations including New Orleans, LA as well as Nederland, TX where she finished high school.  She went on to study at The University of Alabama where she met the love of her life, Michael W. Connell, on the steps of the School of Communications building. Mike had to win her over and still carries his lucky “Ace of Hearts” card in his wallet that he found as a sign that Tonia was “the one”. Mike and Tonia (or affectionately called Toni or Tonia Marie) were married on July 19, 1958, and were together for 64 years, setting a wonderful example of love, patience, and endurance for all of us.

Tonia raised four boys (Mark, Chris, Keith & Paul), during the week while Mike traveled for work to support the family.  She was a remarkably strong, stoic, and resilient woman who handled being a wife and mother with a grace and humility rarely seen. She was strong of character, loyal, and strong willed, all while possessing an elegance and poise that radiated from her. Tonia’s quiet strength was unparalleled, and her stubborn resolve helped her to survive brain tumor surgery, breast cancer and many other of life’s trials all while placing her focus outward on others.

Above all else, her family was the most important priority to her.  Regardless of the challenges, she was always fiercely protective of her family (like a Mama bear with cubs). Tonia’s entire world revolved around Mike and her sons, and later her nine grandchildren, and two great-grandchildren. She had a way of making each son, daughter-in-law, grandchild, and great-grandchild feel like you were her favorite. As her family can attest, she had a singular gift of being able to know when you needed “a kick in the behind” and when to give “great support and love”. She had a gift of being able to tell you “like it is” while also building you up, making you feel valued, and loved.

Affectionately known as “Nana” to her grandchildren, they loved to go to Nana and Paw Paw’s house so they could bask in the glow of her affection, eat a “Nana breakfast with Nana waffles”, and generally be pampered like no one else. She went above and beyond in helping with all her grandchildren, both local and out of town. She could always be counted on for help, support, and sound advice and she was very close with all nine of her grandchildren. Everyone knew that you could rely on Nana, but one thing you definitely did not do is break “Nana Rules”. If Nana said it, it was the law that was respected by all. Case in point…the family’s long standing Christmas gift giving tradition of Dirty Santa almost immediately was renamed to “Dirty Nana”.  When Nana picked a gift…no one dare steal the gift from Nana!!!

Though we are comforted in knowing she is with our Lord and Savior, her loss will be felt tremendously.

There will be a time of visitation Wednesday, November 2, 2022 at 12:00 PM at Spanish Fort United Methodist Church, 6690 Spanish Fort Blvd.. Followed by a graveside service at 1:30 PM at the Alabama State Veterans Memorial Cemetery in Spanish Fort, AL.

In lieu of flowers, please consider donating to one of the following charities: The Haven Animal Shelter, Tunnel to Towers Foundation, and St. Jude Children’s Research Hospital.