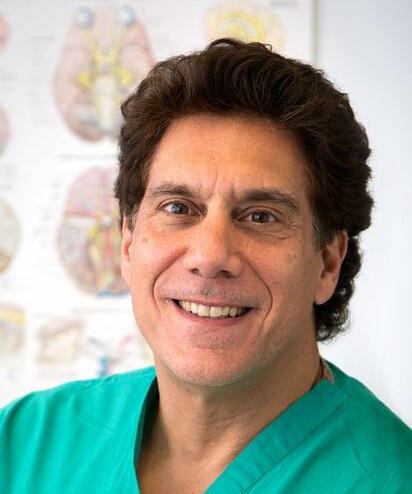 Husband, father, son, brother, and friend, Dr. Walter George Rusyniak, Jr., MD, Professor of Neurosurgery, was born September 22, 1960, in Syracuse, New York, and passed away unexpectedly on February 9, 2022. George spent most of his formative years studying the brain in high school, where he would perform scientific projects pertaining to the anatomy of the brain and its functions.  His goal was to become a neurosurgeon.  He graduated from West Hill High School in 1978.  He attended the University of Rochester. He was magna cum laude for undergraduate and early acceptance for medical school, then went on to complete a residency in neurological surgery.  He also completed a fellowship at the Cleveland Clinic, specializing in epilepsy surgery.

George married Sue on July 11, 1992, in Rochester, NY.  They had one daughter, Alexandra.  George was a dedicated husband and father. His greatest joy in life was to spend time with his wife & daughter.  They made him proud every day and he couldn’t be happier than to be their biggest cheerleader.

After his training, George practiced as a board-certified neurosurgeon in Rome, GA, Utica, NY, and then at the University of South Alabama in Mobile, AL. He most recently became a Professor of Neurosurgery at the University of South Alabama, an achievement he was most proud of.  There have been countless patients, students, co-workers who have benefited from George’s technical skills, compassion, and love for teaching.

George enjoyed traveling.  His favorite places were Sanibel/Captiva Island, Positano, Italy, snowboarding in Keystone, CO, cycling through French Alps and climbing Alpe d’Huez. He traveled to numerous grand slam tennis tournaments.  He achieved the highest levels in tennis, biking, running and karate.  But a favorite for George was playing chess.  He achieved a Master ranking, was considered a chess expert, and traveled all over to chess tournaments.  He also coached and mentored young chess players with the Bayside Chess Club. George was a huge Rolling Stones fan and was disappointed he could only see 6 concerts in the last 2 years.

He is preceded in death by his father, Walter Rusyniak, Sr. and father-in-law, Edward Thompson.

In lieu of flowers, the family asks that memorial donations be made to The Stray Love Foundation, P.O. Box 76, Magnolia Springs, AL 36555, or The University of South Alabama, College of Medicine.

“The sun has set on an amazing life.”
Expressions of condolence for the family may be made at www.hughesfh.com. Arrangements are by Hughes Funeral Home, 26209 Pollard Road, Daphne, AL.