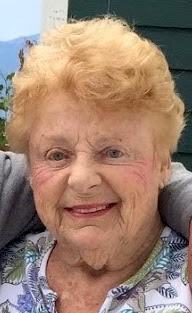 Martha Elizabeth Horlebein, age 87, a native of Jamestown, NY and a resident of Spanish Fort, AL, passed away on Saturday, April 4, 2020. Marty was born to the late George and Elizabeth Bailey Merz, both of Jamestown, NY. She attended and graduated from St. Margaret’s School, a private Episcopal boarding school in Virginia. After high school she graduated from Keuka College with an Associate’s Degree in Secretarial Management.  She met her late husband, Franklin Carl Horlebein of Baltimore, MD, who graduated from MIT with a BS degree in Mechanical Engineering and was married on June 26, 1954.

They bore three children, Steven Kurt, Ann Norman, and John William Horlebein. They raised their family in suburban areas of Baltimore, Maryland and then York, Pennsylvania. In addition to raising their three children, Marty briefly trained and worked at York Hospital as a Nurse’s Aide.

An active member of St. John Lutheran Church in York, PA for over forty years, Marty was a devoted supporter, serving on various school and church committees including the school board and as a church trustee. After Franklin’s death in 1988, she remained in York for an additional 20 years but continued a very active lifestyle that included overseas travel, volunteer work and church life.

Martha moved to Chelan, WA, in 2008 to be near family and enjoy the majestic scenery of the North Cascades. She had a “mother-in-law” addition constructed on to her youngest son, John’s, home and enjoyed grandchildren growing up, attending Lake Chelan Lutheran Church, relished overlooking a glacial lake and the breathtaking sunsets against the adjacent mountain peaks. In 2016 Martha decided she had enough of the long wintery conditions and relocated to Spanish Fort, AL to be near her eldest son, Steven, his family, and enjoy the temperate climate. Until her final days she enjoyed her independence, maintained a very active social life, remained very outgoing and energetic, and continued intermittent travel.

Martha is survived by her children, Steven K. Horlebein of Spanish Fort, AL, Ann N. Godsey of Abington, VA, and John W. Horlebein of Chelan, WA; ten grandchildren; one great-grandchild and many other relatives and friends.

Expressions of condolence may be offered at www.hughesfh.com. Hughes Funeral Home & Crematory in Daphne, AL is assisting the family.